First and foremost I would like to state my firm belief that Islam in its original form is about applied Sacred Geometry and Universal Laws.

It was nothing like the weaponized form of radical Islam we see today that is playing a divisive and destructive role in the world today that is not in accordance with Humanity’s best interests.

Marko Rodin, inventor of the torus-shaped Rodin Coil, unlocked the key to Vortex-based mathematics, the template for the Universe,  from studying Baha’i scriptures.  From this, he came up with the number 9, which Baha’i scriptures and other ancient texts spoke of as the most omnipotent number.  He drew a circle as depicted in the top left picture, with the numbers 1 – 9 drawn around it. 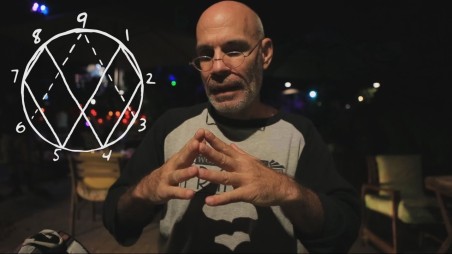 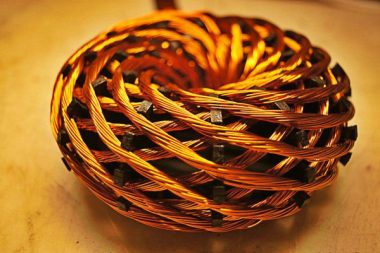 From that he discovered an intriguing number system contained therein.  This led to awareness that this number system – – based on the relationship between the numbers  3 – 6 – 9 – -was the mathematical fingerprint of God.

Selimiye Mosque Dome in Edirne, Turkey is considered to be one of the highest achievements of Islamic Architecture, said to have been built between 1569 – 1575.  Its beautiful construction and art were based on sacred geometry.  Are we even capable of coming even remotely close to building something like this with today’s technology? I don’t think so.

Instead of the historical narrative we have been taught, I am seeing that there was an ancient global unified civilization, the Moorish Empire, and that all of these are examples of architecture built by the Moors.  Since this is not in our historical narrative, we don’t even question what we are told about it being built by other cultures or civilizations.  Moorish Masons of the Ancient Ones were the Master Builders of Civilization, and their handiwork is all over the planet, from ancient to modern.

All of their Moorish Science symbolism was taken over by other groups claiming to be them, falsely claiming their works, or piggy-backing on their legacy.  Or given a darker meaning by association with certain things that were not the original meaning.

For example, this is the Great Seal of the Moors:

Compare it to this symbol on the back of the U. S. one dollar bill:

You can see on it that certain symbols were co-opted from the original, and have come to have certain negative associations, like associating the pyramid with the eye on top of it with Big Brother, the New World Order, and the Illuminati.

The Moors are Friends of Humanity, with Five Principles:  Love, Truth, Peace, Freedom, and Justice.   They are all about teachings to activate the pineal gland and about the human potential to re-connect to our Divine Natures in this lifetime.

So, with all of this preface, what caught my attention about onion domes?

First, I believe what I have been studying in images from the past 2 years, that ancient phallic symbols in the landscape morphed later into Onion domes.  They probably serve a function of the Divine Masculine as something like an energy conductor in the grid’s universal energy flow system. 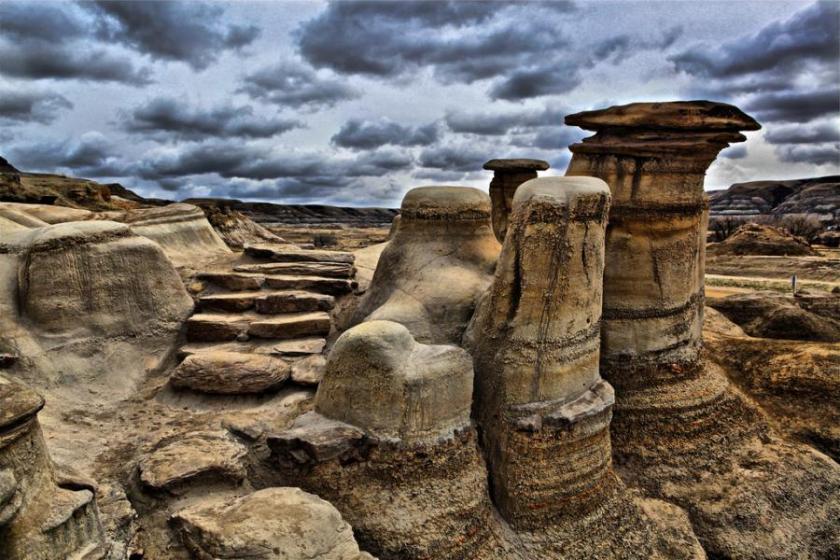 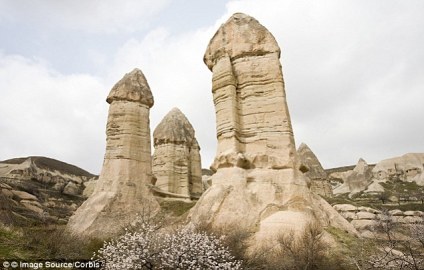 Secondly, I strongly retain the impression from what I was taught in school that onion domes are only associated with Orthodox Churches, right?  That is what I remember anyway.  So when I started on this journey around the world, I couldn’t help but notice that they are everywhere.

So here are comparison photos, from top to bottom, between the Taj Mahal in India; the Hui Mosque, China: the Royal Pavilion in Brighton, England; Hazrat Sultan Mosque in Kazakhstan; and the Sultan Qaboos Grand Mosque in Oman.  All of these countries figure prominently on the planetary gridlines.

Next, series of comparisons involving the Alhambra in Grenada, Spain.  The Moors are actually given credit for this one:

Alhambra Theater in Bradford, England (and the Moors are not given credit for this one):

You can see architectural similarities between top left:  Piazza Della Signoria, Florence, Italy; Middle left – the Alhambra in Spain; bottom left:  The Jama Masyid mosque in Delhi, India; and on the right, the Pena Palace, in Sintra, Portugal. 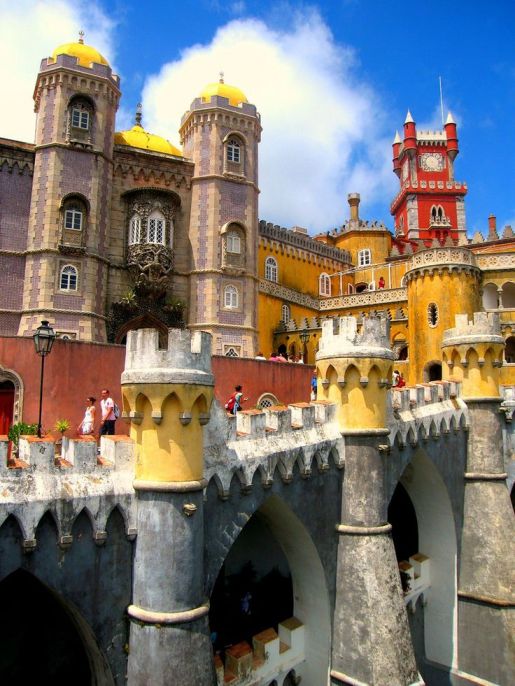 The bright colors of St. Basil’s Russian Orthodox Church in Moscow and this mosque in Singapore remind me of each other: 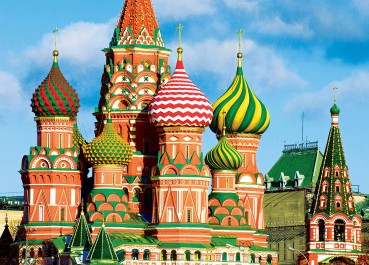 and these whimsical, yet flamboyant designs, reminds me of this one in Sri Lanka in a different kind of way:

I am frequently seeing twin towers: Looked it up and found this explanation:  The entrance of sacred and mysterious places have been guarded by two pillars.  Whether in art or architecture, twin pillars are archetypal symbols representing an important gateway or passage towards the unknown.

So check out the twin towers in these monumental works of architecture:

The Townhall in Augsburg, Germany:

The Frauenkirche in Munich, Germany:

The Central Synagogue of New York:

The Mormon Temple at Palisades State Park in Utah:

and a Mosque with twin towers in Iran.

Now I am going to share comparisons of similarity in styles I found from different places around the world.

This first set of four is a direct comparison of the similarities, starting from top to bottom, between this mosque in Amman, Jordan; the University of Otago in New Zealand; the Seoul Central Mosque in Korea; and the Tokyo Mosque in Japan.

Here is a comparison, from top to bottom, between the Crystal Mosque in Malaysia; the mosque in Grozny, Chechnya; the Alhambra in Spain; and the Coricancha in Peru:

Here is a comparison between the domes of the two towers of the Crystal Mosque in Malaysia on the left, and the Central Synagogue of New York on the right: 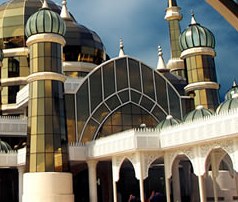 Next is a comparison of the Central window of the Central Synagogue of New York  on the left, with an example of Alhambra Art in Grenada, Spain in middle; and a carved wooden relief in the Coricancha in Cusco, Peru on the right: 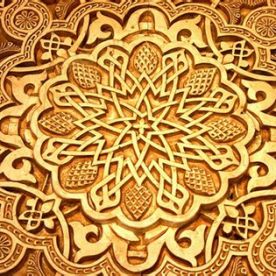 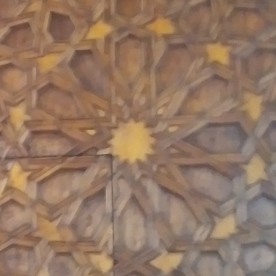 And finally, a comparison of a mosque in Afghanistan on the left, with a mosque in Yerevan, Armenia:

I hope I have given you enough information and evidence to give what I am saying serious consideration.

I believe there was an ancient advanced global civilization that was unified.  I believe we have been given a false historical narrative that removed this civilization from our awareness.  I don’t buy that the similarities are random and coincidental, nor do I believe the phallic shapes were created from natural processes.

Stay tuned, because I have a lot more to share in future posts.