The information that I am going to present to you here came to me in an intuitive, co-creative participatory process.  I did feel like I was receiving spiritual guidance in the process, but I had to work for the information I received.  It didn’t just come to me in one big download.  It seems like to me I had a lifelong experience of collecting puzzle pieces.  And when I started to put the puzzle together,  I made it happen by visiting many ancient sites,  and starting to see what was actually in the environment around me.  When I did so, I received even more intuitive guidance.  It is not information that I received because I was born into knowing it.  Nor did I  have any preconceived notions, ideas, or theories about what I was going to find.

The preparation that I had that helped me find all of this was a passionate interest in megaliths, in long-distance alignments discovered by other researchers, and earth mysteries, and knowledge about sacred geometry.  I drew my conclusions from what I found after I connected the dots of cities in North America, uncovered the shape of a star tetrahedron, and then extended all of the lines coming off of it around the world.  I had to switch to a globe from the map because I was having trouble with determining the earth curvature on the flat map.  It is interesting to note that the star tetrahedron appears to be based on 33, 44, and 55 degrees on the map.  It fell between 30 – 60-degrees.

Once I switched to the globe, I got a magnifying glass and wrote down the cities that were connecting in circular or linear fashion, and wrote them down in spreadsheets.  Then I looked at countless images, and watched hours and hours of drone videos, and I saw the same signature and hand of design, from ancient to modern, all over the planet.

This is one reason why I say there was no place on the planet that this ancient civilization was not, and another is because once I cracked the code of how they managed to cover it up by calling everything natural, and leaving it out of our historical narrative, I literally see it everywhere.

For example, Mt Magazine is called the highest peak in the Ouachita (pronounced Washitaw) Mountains of Arkansas.  I first went to Mt. Magazine in September of 2015 on the week-end of the 4th blood moon of the year at the end of the month.  I received a lot of intuitive information on this trip.

I had stopped at Heavener Runestone State Park on the way to Mt. Magazine.  This location, which is very close to the Arkansas State line, is on the edge of the Ouachita Mountains in Oklahoma.  I had been there once before with friends, and stopped by on my way to Mt. Magazine to connect with the energy I had felt there previously.  The first time I did not take note of my surroundings at the Runestone.  The second time I went there, I noticed that the Runestone was surrounded by an actual wall (which is referred to as a canyon there).  The third time I went to Heavener, I took these pictures further up from the Runestone  in a different location on the state park grounds.

I am spending time on this sequence of events because this actually marked the beginning of when I started putting all of the pieces of the puzzle together.

I had decided to go to Mount Magazine on the week-end of the 4th blood moon in order to do personal ceremony for myself.  Mt. Magazine, according to James Tyberonn, is the location of one of the Atlantean Master Crystals – the Emerald Crystal of Healing.  There are two others in Arkansas, one at Queen Wilhelmina State Park, near Mena, Arkansas, and the other at Magnetic Springs, near Eureka Springs, and actually extraordinarily close to the famous Passion Play location.  I have visited all three sites.

I checked into the Mt. Magazine Lodge.  The original lodge was completed in 1940 during the Roosevelt Administration by the Works Progress Administration (WPA).  I looked around the lobby, and saw a sign for a tour of “Cameron’s Bluff.”  But I had missed it.  After getting my luggage to my room, I left the lodge to take my own tour, and find a location for my ceremony.  As soon as I took to the turn-off for the road that skirts the bluff, I started seeing a wall again. It is such an ancient wall that there is some element of doubt.  But there are some places you can really tell it is a built structure.  These pictures were taken of Cameron’s Bluff.  Thus began my cracking of the cover-up code –  bluffs (and canyons) are actually ancient infrastructure. 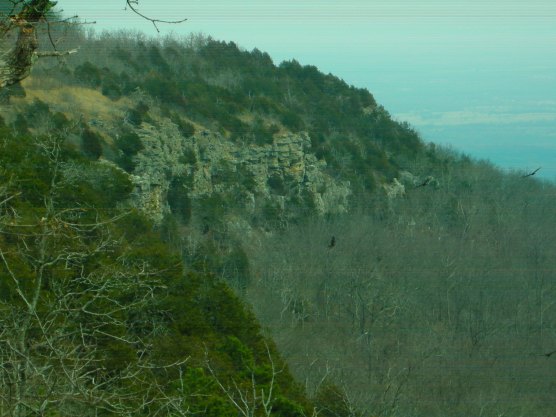 It is important to note that the WPA, which built the roads and facilities at the state park,  also claimed credit for building an amphitheater in the park.

I am asserting from this example, and many others, the Roosevelt’s New Deal work programs like the WPA, Civilian Conservation Corps (CCC), and Tennessee Valley Authority (TVA) served multiple purposes:  1) To create Depression-era jobs; 2) To build infrastructure; and 3) to cover-up ancient sites/infrastructure.  The CCC and WPA in particular were responsible for creating access and infrastructure for the park and recreation system around the country.  So when people go to these places, they think that everything they see was created by the CCC & WPA workers.  It was NOT.  If anything, they used and moved pre-existing materials in the construction, and took credit for building everything.

For example, Roman Nose State Park in Watonga, Oklahoma, was one of many CCC-projects in Oklahoma.  I visited there with friends in 2016, and by this time was well on my way to knowing what I was seeing.  Roman Nose is a beautiful park.  It was named for a Cheyenne Warrior known as Roman Nose.  For part of the year they have a teepee set up on the grounds, and we are told that this location was the winter camping grounds for his Cheyenne tribe.

But then when you go to the part of the park that has springs, this is what you find.

The first picture is where you enter the area.  There is a restroom, and picnic facilities in several locations:

Then, as you walk on the path that takes by the water, you find that the embankment looks like this: 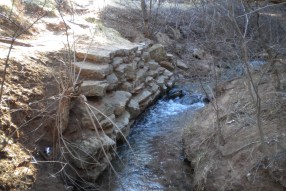 And the further down the path you go, the more intact you find the stonework:

Until you finally come to this exquisitely peaceful spring:

The stonework pictured is clearly of the same design, and built out in a purposeful way.  The CCC operated from 1933 to 1942 in the U.S. for unemployed, unmarried men to help them weather the Great Depression.  Originally for young men ages 18–25, it was eventually expanded to ages 17–28.  Does it make sense that they could have done the original stone work?  It doesn’t.  There are other examples, but this example directly relates to my journey of understanding what has actually taken place.

I have a great deal of more information to share with you about many things, but this lays groundwork for many more examples of how an ubiquitous advanced ancient civilization has been covered up right in front of our eyes.

4 thoughts on “Connecting the Dots, Cracking the Code, and What This Reveals – with Video Form at the End”